Are you a Walmart worker?

If you’ve been keeping up with the Walmart headlines like we have, you’ve probably seen quite a bit of backlash at Walmart’s latest blunder: 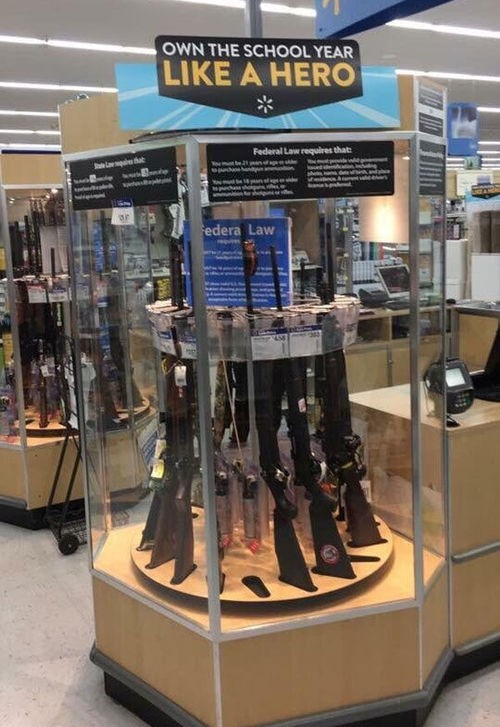 Yes, this is an image of a Walmart back-to-school promotional sign displayed above a gun case telling shoppers to “Own the School Year Like a Hero.” Once the image became public, Walmart apologized profusely tweeting that the display was “terrible,” “definitely NOT okay” and a “regrettable situation.”

Well, after several days of some serious media backlash, Walmart claims it has “definitive proof” that this was a prank, yet refuses to respond to inquiring media outlets about what this evidence is or provide any further details. The Associated Press, New York Post, Consumerist, and other major outlets have all raised questions as to what this “proof” is:

According to the Associated Press: “[Walmart spokesperson] Crowson wouldn’t say what proof the company had: Was an image manipulated? Did a customer move a sign for a joke? Did an employee deliberately or inadvertently place the ‘Own the School Year’ sign on the wrong display?”

SIGN THIS PETITION TELLING WALMART TO ANSWER THE MEDIA’S QUESTIONS AND SHOW THE PROOF.

When will Walmart be held accountable for what it does, not what it says.

And, when you think about it, is Walmart really all that sorry?

It isn’t sorry about selling guns, as Walmart is the nation’s largest seller of guns and ammunition.

In fact, from 1993 – 2012 Walmart was a member of right-wing group ALEC, and during that time, co-chaired an ALEC task force that promoted Stand Your Ground laws.Walmart also refuses to report the amount of revenue it makes in gun sales. But in 2014, Walmart and other big box stores collectively accounted for an estimated 20 percent of the estimated $3.8 billion in sales by gun manufacturers. Even the Pulse nightclub shooter, responsible for the largest mass shooting in U.S. history, purchased his ammunition at Walmart.

So, again, we have to ask, is Walmart really all that sorry?

And if they are, what are they going to do about it?

WALMART: ANSWER THE MEDIA’S QUESTIONS AND SHOW US THE PROOF.

P.S. It’s time Walmart owns the truth like a hero and answers the media’s questions.